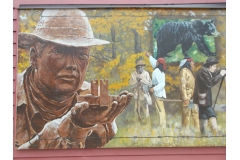 This large mural shows the challenges Augustus Jones and his survey party of first Nations people faced as they pushed north from Burlington reaching the banks of the Conestoga River, near present-day village of Arthur, October 17, 1792.  The baseline is important, as it illustrates the signing of the agreement which established the northern border of the Six Nations land grant. As well, the Baseline forms the boundary for many nearby townships.

This early survey is still used in defining boundaries of many townships and Native land claims.

The latest mural by local artist Cliff Smith was unveiled on Wednesday May 22, 2013 at the corner of George and Charles Street in Arthur on the north side of the building that used to house the New to You store, and before that Brenda’s Bakery.