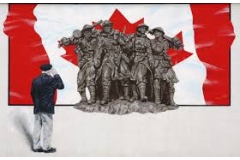 The "Canada's Most Patriotic Village" mural incorporates both general Canadian and specific aspects of Arthur's military service through three panels. The left panel represents participation in conflicts from World War II through Afghanistan, including figures, some inspired by local military personnel, representing various services. The middle panel depicts an Arthur veteran of World War II saluting the Ottawa War Memorial. The right panel references World War I, including the crosses and poppies of Flanders.

The artist is Cliff Smith.

The three murals are on the north side of Sussman's Clothing Store at the southeast corner of George and Frederck Streets.