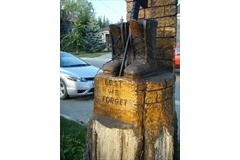 This detailed wooden carving is located in the southeastern portion of the Veterans War Memorial Park, which is the extension of the Roy Grant Lion's Park.  One side of the sculpture depicts a soldier's boots with the barrel of his rifle resting between his boots, and his helmet resting on the butt of his rifle. Under the boots is inscribed: "LEST WE FORGET".  Above  the helmet is a carved poppy.

The other side has a poppy and the beginning portion of the poem In Flanders Fields, and the composer's name Lt. Col John McCrae M.D.

The carving depicts items that a soldier would have used. Carved from wood with some dye to accent the items.

Also included in this park is the cenotaph, plaque for the founding of Mount Forest, and a tank's turret.

This is one of two tree sculptures in Mount Forest.