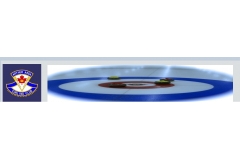 Curling in Arthur dates back over a century. Long gone are the days of the outdoor rink or river and daytime games. Often a rink would stay over night!
In Arthur curling moved to the indoor rink and shared the ice with the hockey players for many years.  In 1978 the Arthur Curling Club finally got their very own home. It sits on Domville Street and Tucker Street corner uses the former ice surface of the second Arthur Arena. The club is operated by a group of
volunteers.
Curling in Arthur first began about 1910 on a private rink on Frederick Street.Curlers used wooden rocks as opposed to present-day granite rocks. The members of the Arthur
Agricultural Society of the 1920 era had faith in their community when they built the arena and the fair grounds and operated them for many years with no help from the community.
In the mid 1920's curlers moved to the then new arena on Domville Street, where they curled on a single sheet at the side of the hockey ice. Curling only lasted about ten years at this locale as there were frequent problems.
In about 1937 curling was done on ice made beside the hockey surface on natural ice. Each player owned his own stones which were all the same weight although the styles and shapes differed. In December 1944, the Enterprise News reported that the local curlers had thier first game of the season.
In 1968 after artificial ice had been put in the arena, curling was revived largely due to the efforts of James P. Howell. In November 1967, J.P. Howell (Royal Bank Manager) and Ron MacPherson had got a price on used stones from Brampton ($1,200).
Curlers used the ice on Monday evening, Tuesday afternoon and evening, and Wednesday afternoon and the rest of the week was taken up with hockey and skating.
Dues were collected from the members for the first time in November of 1967. ($10 Ladies - $20 Men).
Pay as you play was very popular at $ .75 per game and brooms cost $5.00 or $6.00 each.

The current building with renovations is completely accessible for rentals when available.  Curling runs from  October to March with the following leagues:  Ladies-Monday, Men-Tuesday, Skip's Choice-Thursday, Mixed-Friday and Juniors-Sunday.